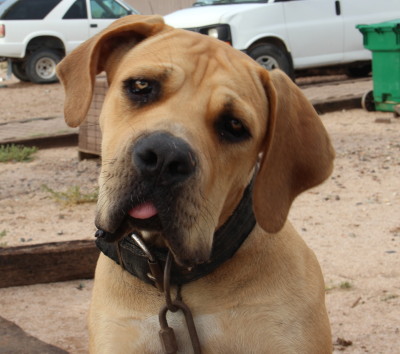 The Boerboel [burbul] is a large, mastiff dog breed from South Africa, bred for the purpose of guarding the homestead. These dogs were often a first line of defense against predators such as lions, hyenas and other big cats and were valuable in tracking and holding down wounded game. Old farmers tell many tales of the strength, agility, and courage of their Boerboels.

The word "Boerboel" derives from "boer", the Afrikaans/Dutch word for "farmer". The English word "bull" sounds to Dutch ears like "boel", hence, the name Boerboel. Boerboel, therefore, translates as either "farmer's dog" or "Boer's dog" and should be pronounced somewhat like "burbull". The Boerboel is the only South African dog breed created to defend the homestead.

Despite the Boerboel's long breeding history, there is great uncertainty as to how many and which breeds were used to create it. It is generally believed that the breed was created from interbreeding native African canine species with breeds brought into South Africa from Dutch, French, and British settlers.

The most likely origins are claimed to date back to Jan van Riebeeck’s arrival to the Cape in 1652. Van Riebeeck brought a "Bullenbijter" with him.[1] Those with him, and laterEuropean settlers, also had large, strong dogs, that almost certainly bred with the indigenous, domestic dog breeds of South Africa.

Later, in 1928, the diamond mining company De Beers imported Bullmastiffs to South Africa to guard the mines. This breed was also crossbred with Boerboels in the region.

The Boerboel Breeders Association was established in 1983 in the Senekal district of the Free State with the sole objective of ennobling and promoting the Boerboel as a unique South African dog breed.

Today, Boerboel breeding is both a hobby and an industry in South Africa. These dogs are now exported from South Africa to other parts of the world.

The protective character of the Boerboel is still evident and is much sought after, as is the calm, stable, and confident composure of the breed. The dogs are obedient and intelligent and have strong territorial instincts. The Boerboel remains the guarding breed of choice amongst current day farmers and is very popular for the same reason in urban communities.

In 2010, the Boerboel was banned in Denmark for being a fighting dog. 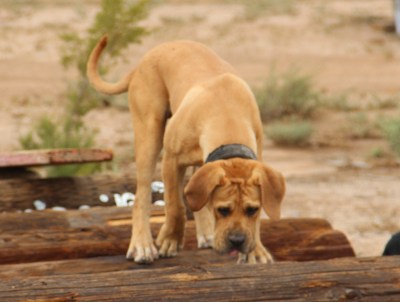