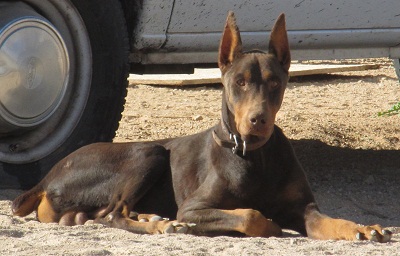 Developed by Karl Friedrich Louis Dobermann, a German tax collector in Germany in the 1860s. Serving in the dangerous role of local tax collector Dobermann needed a bodyguard dog to accompany him during his runs. Dobermann also ran the Apolda dog pound, giving him access to a wide array of dogs of many temperaments, qualities & breeds. With such a selection at hand, he aimed to create a breed that would be suited to accompany him for protecting him during his collections. He set out to develop a breed, in his opinion, would be the perfect combination of strength, speed, endurance, loyalty, intelligence, and ferocity.

Although the exact ratios of mixing, and even the exact breeds that were used, remain uncertain to this day, we can speculate that Dobermann used at least four of the following breeds: German Pinscher, the Beauceron, the Rottweiler, the Thuringian Sylvan Dog, the Greyhound, the Great Dane, the Weimaraner, the German Shorthaired Pointer, the Manchester Terrier, the Old German Shepherd Dog. Later, Otto Göller and Philipp Gruenig continued to develop the breed to become the dog that is seen today. The single exception is the documented crossing with the Greyhound and Manchester Terrier. It is also widely believed that the old German Shepherd gene pool was the single largest contributor to the Doberman breed. Philipp Gruenig's The Dobermann Pinscher - History and development of the breed, (1939), is considered the foremost study of the development of the breed by one of its most ardent students. Gruenig's study describes the breed's early development by Otto Göller, whose hand allowed the Doberman to become the dog we recognize today. The American Kennel Club believes the breeds utilized to develop the Doberman Pinscher may have included the old shorthaired shepherd, Rottweiler, Black and Tan Terrier and the German Pinscher.

In 1894 Dobermann died and in his honor, the Germans named the breed "Dobermann-Pinscher." However, a half century later dropped the 'pinscher' on the grounds that this German word for terrier was no longer appropriate. The British did the same a few years later.

During World War II, the United States Marine Corps adopted the Doberman Pinscher as its official War Dog, although the Corps did not exclusively use this breed in the role.

In the post war era the breed was nearly lost. There were no new litters registered in West Germany from 1949 to 1958. Werner Jung is credited with single-handedly saving the breed. He searched the farms in Germany for typical Pinschers and used these along with 4 oversized Miniature Pinschers and a black and red bitch from East Germany. Jung risked his life to smuggle her into West Germany. Most German Pinschers today are descendants of these dogs. Some pedigrees in the 1959 PSK Standardbuch show a number of dogs with unknown parentage.

The American Kennel Club registered its first Doberman in 1908, and the Doberman Pinscher Club of America was formed in 1921.